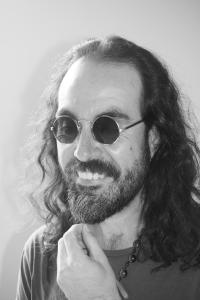 Jesús Sepúlveda is the author of eleven poetry collections and three books of essays, including his green-anarchist manifesto El jardín de las peculiaridades (2002) and his book of literary criticism Poets on the Edge (2016).  His selected poems were collected in Poemas de un bárbaro, published in Santiago de Chile in 2013. A selection of his poetry translated into Portuguese by Pedro Morais and Júlio Henriques appeared in 2020 in the e-book É um rio que perdeu a sua luz.

His most recent poetry collections include Espejo de los detalles (2020), Wirikuta (2019), and  Secoya (2015) published in Virginia and Chile, Puerto Rico, and New York, respectively.  Sepúlveda’s work has been published in more than twenty countries and translated into twelve languages, leading him to participate in many international poetry festivals and readings throughout the world.

On September 11, 2020, Sepúlveda wrote a polyphonic poem about the global pandemic, the political turmoil, and the climate crisis. The poem was triggered by the McKenzie Fire in the Willamette National Forest and the murder of George Floyd. Read the poem here.  Sepúlveda's translation into English was published in the Eugene Weekly in 2021.

Also, read here Jesús' poem "Insurrección," written two days after the uprising in Chile in October 2019.  See also here his reading with a dancing and musical performance at the Glow Variety Show in November 2019 at the Hult Center in Eugene.

He is a board member of the Eugene-based non-profit organization Maple Microdevelopment.

His work can be read at poetajesussepulveda.com

His new collection Espejo de los detalles [Mirror of Details] was simultaneously published in 2020 in Virginia by El Sur es América in a bilingual edition translated by Elmira Louie, and by Calabaza del diablo in Chile.

Over the years, Sepúlveda’s poetry has been anthologized and featured in several publications.  Most recently, in 2018 two main Chilean anthologies included his work—Antología de poesía chilena. La generación post 87 (Catalonia) and Antología de poesía chilena (Editorial Mago).  In addition, eight poems appeared in the two-volume anthology The End of the World Project, published by Moria Press in Indiana in 2019.  His poetry has also been included in the Poetry Review Exit published by Édition Gaz Moutarde in Quebec, Canada in 2019 and the Anthologie de la poésie chilienne. 26 poètes d'aujourd'hui published by the Revue de la Maison de la poésie Rhône-Alpes in France in 2021

A plaquette with his poem “Platon”, translated by Dmitri Fragata and illustrated by French artist Marc Granier, was released in France in 2018 while his poem “El fascismo se sienta a la mesa” (translated by UO alumna Elmira Louie) appeared in the new online journal Periphērica edited by UO Professor Pedro García-Caro.

Sepúlveda’s third collection of poetry Hotel Marconi (Santiago de Chile, 1998) was reprinted in 2006 and 2012 in a bilingual edition translated by poet Paul Dresman.  This book was made into a film in Chile by Pulso Films in 2009 and was reviewed in 2018 by poet Mohammad Salleh in the Malasian literary journal Dewan Sastera (The Halls of Literature) in Kuala Lumpur, calling Sepúlveda “a poet's poet.”

In 2000 Correo negro (Buenos Aires, 2001) was awarded first prize in poetry by the Argentine magazine Perro Negro and was reprinted in Chile in 2008.  His first collection Lugar de origen (1987) still remains a work representative of his generation growing up under Pinochet’s dictatorship.  In the late 1980’s and early 1990’s the Pablo Neruda Foundation as well as the Fondo del Libro y la Lectura granted Sepúlveda literary fellowships.

In the 1990’s Sepúlveda directed the literary magazine Piel de Leopardo, published in Chile and later in Argentina, and co-edited in collaboration with poet Paul Dresman the bilingual journal Helicóptero published in Eugene, Oregon.

Sepúlveda’s new project Textos intoxicados approaches the notion of intoxication embedded in a lineage of writers who emerged from the Industrial Revolution on, and who explore their consciousness through the use of psychoactive substances and master plants. A book chapter from this project was included in La prohibición de las drogas (Universidad Autónoma de Querétaro, 2015), edited by Doming Schievenini, César Tarello, and Ramón del Llano.

Sepúlveda’s most recent academic book Poets on the Edge (Brown Walker Press, 2016) critically explores the relationship between poetry and its context through the work of four Latin American poets: Chilean Vicente Huidobro (1898-1948), Peruvian César Vallejo (1893-1938), Chilean Juan Luis Martínez (1943-1993), and Argentine Néstor Perlongher (1949-1992).  This book offers a new understanding of the hybrid and edgy nature of Latin American poetics, identity, and subjectivity in light of the emergence of the avant-garde movements, the panoptic societies of control imposed in the Southern Cone during the period of the military regimes, and the Neobaroque sensitivity influenced by ayahuasca-based ceremonies.

Sepúlveda’s hybrid philosophical text The Garden of Peculiarities has garnered wide attention.  Originally published in Spanish in Buenos Aires in 2002 and translated into English in 2005, it came to be considered the first anarchist manifesto of 21st century by alternative media.  The Garden of Peculiarities was serialized in the magazine Green Anarchy, soon translated into various languages and reprinted in many countries, including the US (2005), Canada (2007), Italy (2010), Brazil (2009, 2011, 2017), Chile (2011, 2018), France (2013), Argentina (2015), Spain (2015), South Africa (2011, 2016), and Portugal (2018).  There is currently a translation in progress into Turkish, while pirated editions keep circulating.  South African filmmaker Aryan Kaganof included quotations from the book (translated into SeTswana) for his documentary “Night Is Coming”.

The anthology of essays Rebeldes y Terrestres (Santiago de Chile, 2008) is a compilation of essays by thinkers, scholars, and activists from North America, Latin America, and Europe. This book, co-edited by Sepúlveda and Dr. Amado Láscar, addresses the ecological crisis and the need for a paradigm shift from our modern-industrial civilization toward a more bio-centric and community-oriented society.

Jesús Sepúlveda's most recent international performance was a poetry reading and conversation at Gato Vadio in Oporto, Portugal on September 11, 2021.

In October 2019 he participated in the Trois-Rivières International Poetry Festival in Quebec, Canada, while his participation at the Chair Poetry Evenings in Kolkata in India was postponed because of flight cancelations.  In 2020 he participated virtually in the Festival Internacional Poético-Musical Livrera (Uruguay-Brazil).

Between 2015 and 2019 Jesús Sepúlveda read his poetry in many poetry events around the world. On March 2019 he was invited to the 11thInternational Poetry Festival in Puerto Rico, where the Proyecto Editorial La Chifurnia published Wirikuta—a selection of his poetry.  In 2018 he participated in the festival “Poetry on the Road” in Bremen, Germany; the 5th “Poésie Sauvage” Poetry Festival in La Salvetat-sur-Agoût, France; and the “Carruaje de pájaros” International Poetry Festival in Chiapas, Mexico. He also spent a month in Germany invited by the Sylt Foundation as a writer-in-residence and toured Portugal presenting the Portuguese edition of his book The Garden of Peculiarities.

In 2017 he participated in the renowned International Poetry Festival of Medellín and the 21st International Poetry Festival of Cartagena, both in Colombia.  He was also a keynote speaker at the literary conference “Sensing Change and Transformation” in Phnom Penh, Cambodia, where he was invited by the Sylt Foundation.  The Sylt Foundation also sponsored him to be a writer-in-residence in Johannesburg, South Africa in December 2016.

In 2015 Sepúlveda read his poetry at the Tabanan International Poetry Festival in Bali, Indonesia; the 54th Struga Poetry Evenings in Struga, Macedonia; and the XI Festival Internacional de Poesía de Granada, Nicaragua. His selected poems Poemas de un bárbaro were presented in Navarra, Spain in 2014 and in 2013 he toured Chile for the book release.

Shamanism is also a long-standing research and teaching interest of Sepúlveda.  In his ongoing sabbatical project Realidades multidimensionales, Sepúlveda explores the topic of shamanism and studies shamanic phenomena in their interconnection with plants of power, dreams, consciousness, and literary subjectivity.  The conversation "In Service to the Deities" with Dr. Chellis Glendinning published in Sacred Fire also approaches shamanism in relation to its political implications. A larger exploration of the subject is offered in “A Mockingbird in the Garden,” a conversation with Aragorn Eloff, published in Johannesburg in 2016.

Sepúlveda was featured in Chellis Glendinning’s  In the Company of Rebels (2019), a collection of portraits of artists and thinkers, which gives an account of Sepúlveda’s biography and work, illustrating his commitment to poetry and world issues.

• Literature and the Environment in Latin America (undergraduate seminar, SPAN 407)