Recently the Romance Language department has recognized graduating seniors for their accomplishments and success in our programs. Professor Grammon has felt encouraged to recognize Maya Mackey for her success in the department. More specifically, we would like to acknowledge Maya for her research presentation that was created alongside Professor Grammon. She began working within Professor Grammon's class on "Linguistic Landscapes" in Winter of 2020 and decided to further her research because she, “was surprised that with such a large Spanish-speaking population, not only in Oregon but in Eugene, there is a lack of signage for the benefit of this community.”

When asked to explain what linguistic landscapes are Maya described them as, “visible signage of language on public and commercial signs in a community or city such as public road signs, advertisements, posters & announcements in storefronts, regulatory signs, municipal rules & notices, even graffiti”. Maya continues to explain how linguistic landscapes can affect the population and how included certain groups feel in the community. She further explains, “without signage in one's native language it is hard to feel comfortable and welcomed within that community.” Therefore Maya and her peers took it upon themselves to document most of the signage around Downtown Eugene.

They found that most of the bilingual or monolingual Spanish signs were implemented to police that community (municipality signs about rules and regulations) rather than welcoming ones. The group of students also interviewed Spanish-speaking members of the community and asked them how the linguistic landscape of Eugene made them feel. Their findings showed that many of them did not feel safe or welcomed in the community. Maya explains that the purpose of the research “is to show how linguistic landscapes contribute to a community's ethnolinguistic vitality (the ability to maintain and protect their language) and how not having signage for the benefit of the Spanish-speaking community can diminish this vitality.”

Through her internship with Professor Grammon, she was able to analyze this data and come to several conclusions but most importantly she found that there is a lack of Spanish signage and businesses that directly cater to the Spanish-speaking community and feels the City of Eugene needs to change that.

The project was ultimately presented to the City of Eugene by Professor Grammon as a proposal to implement more Spanish signage around Downtown Eugene. Maya presented in the Undergraduate Research Symposium of 2020 because she felt that this topic needed to be talked about more because the Spanish-speaking community is a vital part of Eugene. At the symposium, Maya was the first-place recipient of the Global Studies award through the Department of Global Studies for her oral presentation this year, which can be viewed using this link: https://www.youtube.com/watch?v=eFgWTt76Bvo (presentation 4:10-19:45). 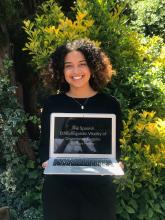