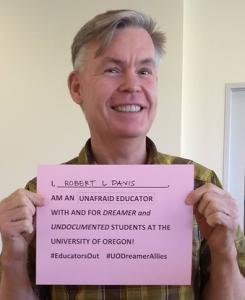 I began my study of Spanish in high school, and a study abroad scholarship in college took me to Madrid, Spain, where my life-long passion for Iberian culture began. Since that first trip in 1981, I have studied or worked in Salamanca, Seville, Segovia, Granada, and Huelva (also Marseille, France, and Rome, Italy), and I have travelled to every corner of the Iberian peninsula. I speak Spanish and French and continue to learn Portuguese, Catalan, and Italian.

After completing a BA in Spanish literature, I studied linguistics at the graduate level, and here at UO I teach Spanish and Romance linguistics courses. My position as Director of Language Instruction led me to work on issues in language program direction, teaching methodologies, and teacher training, and my research since coming to UO has centered on content-based instruction, using technology in L2 teaching, teaching culture, and second-language assessment. I have co-authored several textbooks used nationally for beginning and advanced language study, as well as articles in the research areas above.

*These graduate courses may count for any period of the M.A. degree, depending on the topic of the final project, and with the advisor's approval.